I remember very clearly the first time you caught a critter in the house.

There was a thump in the wee hours of the morning. By the time I was out of bed, you were heading down the stairs with a small squeaking animal in your mouth. You could really move when you felt like it.

Max joined the chase, and we followed you into the kitchen. Me in pajamas, we were all in the dark, and the critter was squawking non-stop.

I don’t remember why I thought it was a good idea to try and take the ‘mouse’ away from you. I’m not even sure what I planned to do with it if you gave it up, but it was the middle of the night and I’d never dealt with this situation before.

I yelled, Max lunged and you let it go.

It FLEW straight at my knees.

Now, I’m not one to panic. I think of myself as a person who stays relatively calm in a crisis. I’m also not really a girly girl. But. At two in the morning. In the dark. With something flying straight at me?

When they talk about fight or flight, I have to say the flight reflex won that night. I shrieked, jumped straight up and scared both of you cats into hiding.

The bat flew past me and ended up clinging to the wall on the stair well, above my reach.

Even after all that bumping in the night, I still had to go wake my husband for round two, which he wisely fought alone. 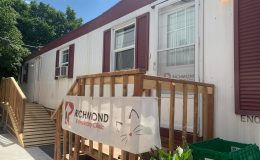