Manny, our little character, hurt himself.

He was playing, he fell awkwardly and he cut himself. He not only cut the skin on his right hind leg, he also cut partway through what we would call the Achilles tendon.

From falling. When playing.

It looked like a skin injury at first, so despite his strenuous protests, the area was cleaned and skin edges glued together and he was given a little something to relieve pain.

But with Manny, it seems, things are never simple (see photo above of cat in cast). Within a day or so, when he should have been walking well, he wasn’t. It seems that his ‘full throttle’ approach to life led to a complete rupture of the tendon, which we suspected because he was walking on his hock, like this: 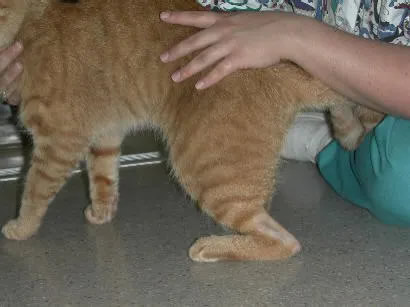 Tendons do not repair themselves, and if they are not fixed with surgery, then Manny would be restricted in his activity for life.

So it was off to surgery for our little Manny.

Gradual introduction of your new kitten

What does urine tell us?